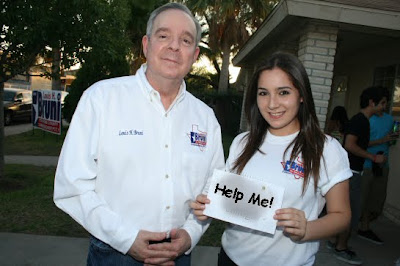 The Laredo Buzz carried a propaganda facade of a story on Louis Bruni campaigning in the South Side of Laredo to garner votes.

Of course readers will likely be familiar with Bruni's comical time at the city council and his failed bid to unseat Senator Judith Zaffirini as a Republican candidate.

Now, the phoenix dodo bird has risen from the ashes and has reinvented himself as a man of the people to gain the Webb County Commissioner seat held by the incumbent Frank Sciaraffa.

Exploring the South Side at ground level and taking informal polls, many non-pachanga voters like those seen in the pics organized by the Bruni camp are a little skeptical about the oil tycoon. Not everyone, of course, but many. What many people are concerned with is Bruni's true empathy with the residents of the South Side considering his wealthy background which contrasts with that of Sciaraffa's (Sciaraffa is a native of the South Side and an alumnus of Cigarroa).

Either way, this promises to be a hotly contested race, one which will certainly go down to the wire.

We here at La Sanbe are waiting the next round of carne asadas and pachangas. Maybe we'll get invited to one too.

If you want to see more, click on Laredo Buzz to see how websites can be bought off influenced by the gleaming shine of jewels and coins.
Posted by KeyRose at 7:36 AM