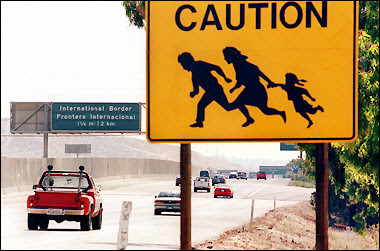 Some people are really passionate about immigrants coming to this country. As Texas tries to pass legislation that resembles that of Arizona's SB1070, frustrations start to show.

“If you want to know why we can't pass legislation in Texas, it's because we have 37, no, 36 Hispanics in the Legislature. So, that's part of our problem, and we need to change those numbers,” said Rebecca Forest, a co-founder of the Immigration Reform Coalition of Texas. “We need to do something about that in fact.”

Translation: Hispanics have infiltrated the Legislature; They are not welcome.
The San Antonio Tea Party president took a different stance.

Hispanic liberal legislators are the problem? In Texas?!!!!!!!! Are you effing kidding me, man?
If Texas has trouble passing legislation that would target undocumented immigrants it's because people, including legislators, realize what effect it would have on the Tx economy. Businesses rely on the immigrant labor force, not to mention their buying power.
Posted by KeyRose at 8:37 AM