I Always Think of Laundry As Scary 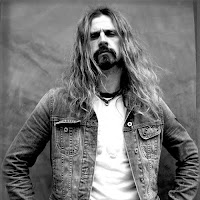 "He who rejects change is the architect of decay. The only human institution which rejects progress is the cemetery." ~Harold Wilson
So, change is good. Take for example, Rob Zombie (who seems to like cemeteries by the way!). He started the rock/metal band White Zombie in the late 80's, and they had a huge hit "Thunder Kiss '65" in 1992, among others.
The band split up after a few albums, then Rob went solo. Rob directed most of his band's music videos, and his interest in horror films led him to become a movie director of the genre. He even directed an L.A. based episode of CSI: Miami!
Now Rob's talents have been utilized for a very unique commercial for, of all things, Woolite! I guess after taking on this job, Rob will be ready for his "Hell on Earth" Tour with Slayer next month. Cheers to change!
Posted by KeyRose at 5:28 PM