He's Never Sick Or Hospitalized For This Stuff 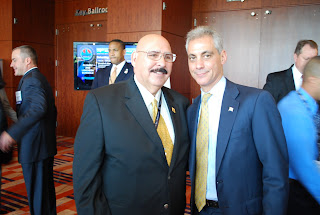 (Baltimore, MD– June 17, 2011) Mayor Raul G. Salinas spent the first day of the 79th Annual Meeting of the United States Conference of Mayors (USCM) visiting with his fellow mayors on issues of interest to Laredo and reviewing various resolutions submitted by mayors around the county.  He had meetings with two of the leading mayors in America to ensure they understood Laredo’s agenda is the nation’s agenda.  First on the Mayor’s list was newly elected Chicago Mayor Rahm Emanuel.  Mayor Salinas talked to Mayor Emanuel about the “Dream Act,” immigration reform and jobs.  “It’s clear to all that President Obama will rely heavily upon Mayor Emanuel for insights into local government issues.  I wanted to make sure that Mayor Emanuel fully appreciates that in addition to hometown and homeland security, immigration reform and job creation are Laredo’s two leading issues.  I was very pleased with our conversation, and I look forward to working with the mayor in the years ahead.”  Mayor Salinas also met with Los Angeles Mayor Antonio Villaraigosa who will be elevated to President of the Conference on Monday.  “I look forward to the presidency of Mayor Villaraigosa. He is an important national leader; he will be America’s mayor.  He understands the challenges of the Hispanic community and the need for our community’s voice to be heard.”
The Mayor also held private meetings with representatives of the Department of Homeland Security that are here in Baltimore.  He explained: “I never want to miss an opportunity to remind DHS of the strong partner they have in Laredo, and of the fact that Laredo is not fully compensated for the integral role we play in homeland security.”
Tomorrow, Mayor Salinas will participate in committee meetings to consider policy resolutions.  Two of the resolutions were authored by Mayors Salinas.  One speaks to the need for a comprehensive and compassionate immigration reform.  The second, co-sponsored with New York Mayor Michael Bloomberg, calls on the Federal Communications Commission to respect cities’ authority to collect reasonable fees from telecommunications providers that use public assets.
On Sunday, Mayor Salinas will chair the Conference of Mayor’s Immigration Task Force at which ICE Director Morton is a presenter.
Posted by KeyRose at 9:37 PM