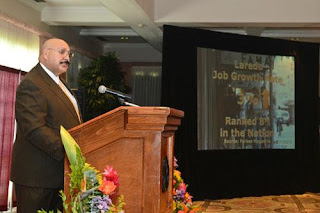 Via the LMT (Kreighbaum) today:

But Salinas said that at 8 percent, Laredo’s unemployment rate is lower than the rates in El Paso (9.7 percent) and the Rio Grande Valley (11.4 percent).

Photo courtesy of the LMT

KGNS covered the "State of the City Address" yesterday, but for some reason, they don't have the video available for me to post on this here blog.  And today, KLDO doesn't even mention anything about the mayor's speech even though they featured a screen grab of a Que Fregados' post last night relating to the fee that was collected for the address.  Strange.

If the KGNS clip was available, I could point out where the mayor cited Laredo's 8 percent unemployment rate (done so above with help from LMT).  He proudly commented that Laredo has not had it this good in the past (paraphrasing).  Then Miguel Conchas, of the Chamber of Commerce, said that Laredo's unemployment rate in 2008 was 5 percent.  LaredoTejas picked up on that little nugget as well.

Of course we knew the mayor was going to brag about all the supposed advancements the city has made, such as the funding they got for first responders that was always there to begin with.  But for him to be sending out mixed messages to the public is embarrassing.  It's obvious that he didn't look at former job statistics.  He says something and then Conchas refutes it altogether.  Check out this graph from the Bureau of Labor Statistics.

It looks like things were better before, as far as Laredo unemployment numbers are concerned.  And downtown merchants know this too well as they have seen better days.

I don't have anything against being optimistic, but for gawdsakes man, get your facts straight.  Be a little more straightforward with us, especially if people are going to shell out $35 to hear you speak.