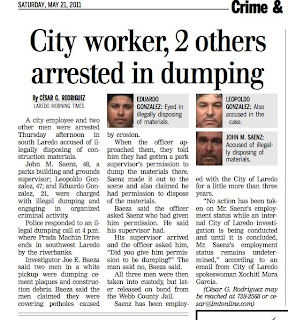 Three men were arrested for dumping building materials near a park in south Laredo.  One of those arrested is a city employee who claimed that he had gotten permission from his supervisor to dump the debris.

This is not the first time somebody has been charged with illegally dumping old construction materials at sites throughout the city.  Dumping of this stuff, and tires, branches, furniture, etc., speaks more of the lack of recycling services Laredo has to offer.

All of these materials could be reused if properly treated.  Those cement plaques the men discarded could be used by people who indeed have problems with erosion.  Does anybody know if construction materials just end up in the local landfill?

Recycling projects can be large or small.  Take a look at the video of a man who processes hard debris and sells it back to the community.  There's money to be made here but nobody has taken the lead.  And for that we have men going to jail.