By ANDREW KREIGHBAUM
Laredo Morning Times
Published: Monday, May 16, 2011 1:08 AM CDT
Laredo received more welcome rainfall for the second time in a week on Sunday.
But at today’s City Council meeting, Mayor Raul Salinas will ask for an update of measures taken by the Laredo Fire Department in response to ongoing drought conditions.

I think the mayor is looking at the wrong people.  He should be talking to staff at public works, code enforcement, and solid waste to take care of all the trash, branches, tires, and pallets scattered around the barrios.  Take care of those fire hazards and let the fire department do whatever it is they do.

UPDATE:  I've emailed the city about this pile of branches in my neighborhood.  That was several weeks ago. 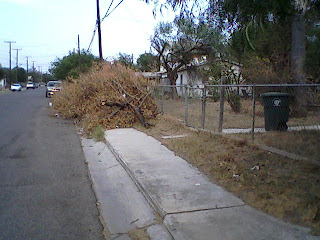