And the Mirror Ball Trophy Goes To... 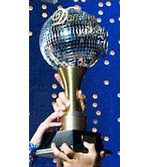 Dancing With The Stars crowned the new champion tonight, and it is none other than Pittsburgh Steeler Hines Ward. Along with his professional dance partner Kym Johnson, Hines beat out the other top favorites Kirstie Alley, who danced with Maks Chmerkovskiy, and Chelsea Kane, who danced with Mark Ballas.
Another unexpected surprise from tonight's show was having an unannounced Josh Groban grace the stage to sing one of his popular songs for the performance of previously eliminated couple Petra Nemcova and Dmitry Chaplin. Sweet.
As a Steelers fan I made sure to watch this entire season of DWTS to show my support for Hines. For the first time I also voted consistently for Hines and other favorites. There were many stars that had tremendous dancing talent this season, so kudos to Hines for coming out on top.
Hines and his partner Kym also overcame a serious injury during rehearsals a couple of weeks ago. A flip the couple was practicing went terribly wrong, causing Hines to fall on Kym and her neck hit the floor. She was transported to the hospital, but luckily Kym recovered completely.
Congratulations to Hines and Kym. Here was one of my personal favorite dances of theirs...
And one of their perfect score performances, which I also loved...
Very nice! Until next season...
Posted by KeyRose at 9:16 PM