Aldo Tatangelo Would Roll Over In His Grave 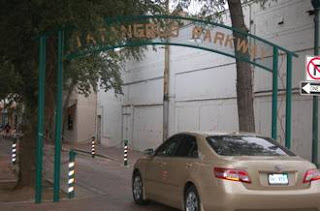 El Manana reports on the state of the Aldo Tatangelo Parkway, the tribute to one of Laredo's former mayors.  The site is littered with beer bottles, trash, and graffiti.  And bar patrons with full bladders freely make use of the walkway by adding an aromatic feature for those curios enough to pass by.

The writer describes the pathway, which cost more than $300,000, as an attraction for visitors.  It was supposed to bring attention to one of Laredo's most notable figures.  Instead the area has been taken over by vagrants, and is hard to maneuver through at night, what with all the visible drunkards who like to leave their bottles strewn about.

Perhaps it's time to think of another way to honor Aldo Tatangelo.
Posted by KeyRose at 7:18 AM