What Was Agreed Upon?

I think it was last week that I heard Tom Wade on his radio show talk about the baseball stadium that's going to be built near the LEA.  He said that the stadium was never intended to be built for the Laredo Broncos, and that city staff never threw around a price estimate for the construction of the venue.  According to him it was the Broncos organization who said it was going to cost less than $10 million.

I personally thought that the stadium was going to be built for the team.  After all, they had been here for several years and it made sense to reward them with a brand new park.  But apparently, I was the one who was confused.

So let's go back and see how this all got started, shall we?

Carlos Villarreal, City Manager, discussed the three different options provided to City Council.  He said that he was skeptical of considering option I because it leaves itself to speculation.  He asked City Council to consider allowing staff an additional 3 days to return with a recommendation.

Motion to instruct staff to return to City Council in 30 days with additional information on Option II and three regarding a new stadium for the Laredo Broncos.
For: 7    Against: 1  Moved: CM Rendon Second: CM Chavez

It was the Laredo Broncos who lobbied the city to have a new stadium built.  But city council decided to go in another direction.  When I spoke to Councilman Landeck in 2009, he told me that the stadium was never meant to be for the Broncos.  Of course this was after the stadium had already been approved by the voters in the 2008 general election.  Here's some of what he had to say:

At a certain time, we were discussing the possibility of partnering with the Broncos to build a stadium but the final decision of the voters of the city of Laredo was to go on our own and use the money that we already have; we have about $20 million already available...

So it was the voters who shut out the Broncos? 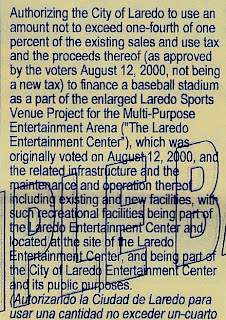 The voters approved for the stadium to go forward; we didn't chose between the city and the Broncos.

It's amazing how much revisionist history gets tossed around, even with such simple things as a baseball stadium.  Well, it's a million-dollar project, so perhaps it's no so simple after all.
Posted by KeyRose at 3:40 PM