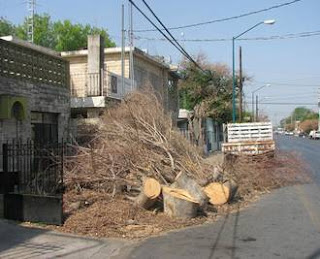 Nuevo Laredoites dealing with the large number of dead trees are blaming the freezing temperatures that the area experienced a couple of months ago.  Now officials want to replace those fallen trees with new ones.  Schools will get trees as donations; And public places, such as parks and plazas, will also have their landscapes renewed.

The scene above has popped up in a lot of local residential places, especially in the Chacon, and Heights neighborhoods.  It seems like whole trees have been taken out.  Whether it's attributed to the cold weather is unknown.  I will say that sometimes people uproot trees, not because they are dry or diseased, but instead removed for fear that a strong wind could topple them over one's property.

We haven't had a lot of rainfall in some time.  People might not water as much during the winter time but it's advisable to water trees even though they're dormant.  Also, our pruning approach is not the most proper.  Chopping off branches incorrectly does plenty to damage a tree.  The cold months here are mild.  I think our treatment of trees is more to blame for their demise than a couple of cold days.
Posted by KeyRose at 8:55 AM