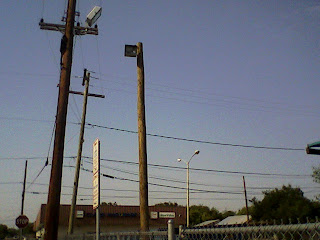 The City of Laredo operates a recycling station at the corner of McPherson and Clark.  At this location, residents can go turn in their city-issue blue bags filled with the allowable recycled materials, i.e. cardboard, plastic containers, paper, etc.  But you don't have to do so.  City employees go around twice a month (used to be weekly) and pick up the blue bags off of your curb.

I forget to put out the bags sometimes so I have to make the trip out to the central Laredo spot every now and then.  The other day I noticed something different:  a recording telling me that I was being watched.  As I neared the fence to throw my blue bag over, I heard a robotic voice say, "Stop, you are being photographed."  Now granted, it was after hours; I'm guessing city staff wants to deter people from dumping tires and other garbage with this technology.

I like the idea of keeping an eye on things.  Kudos to city staff.  I just hope I don't get a notice in the mail to appear in court or something for dropping off recyclables when this place is closed.
Posted by KeyRose at 6:09 PM