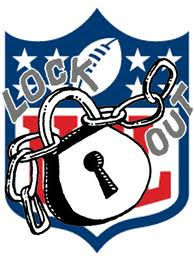 The NFL lockout that has been looming for over six weeks was lifted by U.S. District Judge Susan Nelson on Monday, at least temporarily. The NFL immediately filed an appeal and asked the judge to "freeze her ruling to let the appeals process play out." So the stand off continues with the future of the upcoming NFL season up in the air.
Players were being encouraged to report to their practice facilities today. Most players that did were allowed in, but their efforts were not very successful.

In one of the oddest days in NFL history, players showed up at their team headquarters and most were told that they were welcome to come inside as long as they didn’t participate in any sort of “football activities.”

Dallas Cowboys owner Jerry Jones chimed in after he left his facilities closed:

“We are in the process of determining throughout the league as to just how we’ll proceed and when we’ll open the new year across the league, the new football year. We have not done that.”

The 2011 NFL Draft takes place this Thursday at Radio City Music Hall in New York City. Good luck to those players. I don't know about anyone else, but I'm ready for some football!
Posted by KeyRose at 7:49 PM