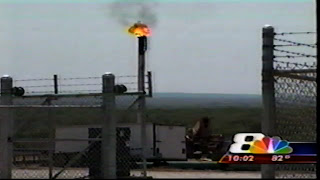 The Rio Grande International Study Center and the Laredo Main Library hosted a screening of "Gasland" yesterday.  Props to the staff from the RGISC (Dr. Jim Earhart, Tricia Cortez, Angeline Townsend, and many others) for putting on an excellent presentation.  I knew what the gist of the documentary was about but I didn't know I was going to leave the event with such a suspicion of our drinking water and those drilling for natural gas near the Rio Grande.

My only solace, for the time being, is that my hair isn't falling off.  I have noticed a possum or two dead on my property.  Could that mean something?   And I have seen a mangy cat roaming around my house as well.  It could be the result of some chemical flying through the air, or it could be that pets don't stand a chance in the barrio from other longstanding factors.

For those who didn't make it out to the library, Que Fregados has some nice charts and graphs posted, courtesy of the RGISC.  Pro8news provided its usual team coverage (and photo above).  And LaredoTejas posted a story that appeared in the Huffington Post, and in the Express-News this weekend, entitled, 'Democratic Report: Carcinogens Injected Into Wells.'

The information gathered by Josh Fox, director of 'Gasland,' might seem somewhat unfair and sensational to some.  Hearing about animals severely shedding and eventually dying, and of water along a stream being set on fire would definitely create some doubt.  But too much is at stake here.  I often hear people say that Al Qaeda, or Sharia law is a threat to our way of life.  For me, contamination of our water source is more of a threat to our way of life.

One attendee yesterday stated something quite important:  'We don't want to find ourselves behind in the game two years from now.' (paraphrasing)  RGISC staff does not want to stop the use of hydraulic fracturing.  They simply want the process to be more transparent for the public.  I want to know exactly what is going on in Webb County.  I want to know if oil and gas companies are contaminating our water.  It's difficult when you have to go up against big money, big oil, and complacent politicians.

I'll try to do my little part, for this issue can't be ignored.  And you can do something too:  you can mention this to our local representatives.  If you run into Henry Cuellar, ask him about 'fracking' in Webb County, and tell him to support the Fracturing Responsibility and Awareness of Chemicals Act.

I would love to be proved wrong about all this.  If you can reassure me that hydraulic fracturing is safe, or that it's not taking place in our area, I will sleep better at night.  But for now, I can't take the word of an industry whose biggest concern is the bottom line.
Posted by KeyRose at 11:14 AM