Code Enforcement In The Barrio 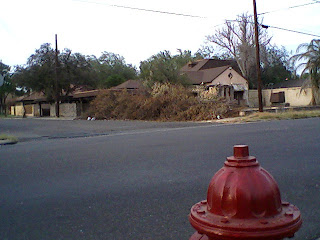 El reportero urbano and I were having a chat the other day and he was dismayed by all the trash thrown around the city, especially in the barrio.  We both made mention of tires, pallets, branches, junked cars and other throwaways.  He wondered whether it was the city or the public that was dropping the ball.

I know that the city has scheduled days to pick up leaves, and branches, just like they do for the blue bags (recyclables) but apparently they have to be called for garden debris because I've noticed several locations in El Chacon where curbs are covered with branches.  (See picture above)  These situations are unsightly and dangerous; They could easily go up in flames.

We talked at length about this and came to the conclusion that something has to be done.  There's just too much junk out there for us to let it slide.  I brought up the idea of having a neighborhood watch of sorts, but dedicated more towards trash pick-up.  Each neighborhood could have its own group to tackle the problem on a bi-weekly basis.

Of course, I don't own a truck so it's difficult for me to haul much away.  But action is imperative.  I just have to figure out a way to round up volunteers who have the want and means to do this.

One thing that I found interesting is the iPhone app. that Sheriff Cuellar is utilizing to have citizens report crime.  That same approach could be used to report code enforcement violations.  Although we could also just send text messages or emails to the appropriate department staff.  Whatever the case, LaSanbe will do something.  I just have to figure out a name for the Chacon volunteer group.
Posted by KeyRose at 6:03 PM