Today I went out to the local landfill to turn in three tires that were lying around in El Chacon.  Actually one of the tires was mine --  The tire shop who installed a "new" tire on my car gave me the old tire back.

Anyway, we have a little problem with discarded tires.  And this blog isn't the only one to have noticed it.  They're everywhere, and for some reason, they tend to end up near railroad tracks.  This is the second trip I make to rid my neighborhood of tires.  I'd like to do more, but as you'll learn, I'm limited as to how much I can contribute.

Yesterday I talked to several people from different city departments.  Somebody from Solid Waste transferred me to Public Works; From there I was directed to Environmental Services.  What I found out is that I can only make two trips to the landfill a month.  With each trip the first four tires I take won't cost me anything.  If I take anything over that limit, I'll be charged per tire.

I asked the lady if I could be given a waiver since I want to make more frequent trips out there, but she said that I would have to talk to the manager.  Apparently they have to check out my background to see if I'm not some sort of used tire retailer.  I left my name and number but I didn't hear from anybody yesterday afternoon.

I was told that city staff who find tires on their routes have been directed to pick them up and take them in.  She said that they're supposed to load them up on their trucks.  I'm guessing it's personnel that works with the Solid Waste Dept. and Parks & Leisure.  Obviously this isn't happening.

Turning in eight tires a month by myself isn't that bad when I think about it.  But to keep our neighborhood cleaner, I'm going to have to recruit some people to help me out, or push the issue so people know what to do.  If anybody has any ideas, let me know.

Tire shredder at the landfill pictured below. 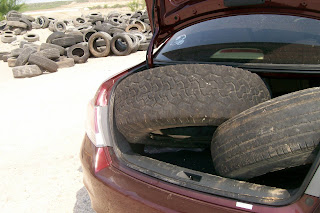 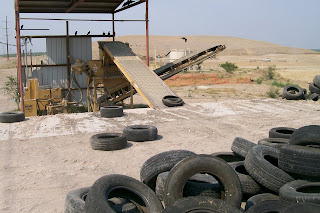