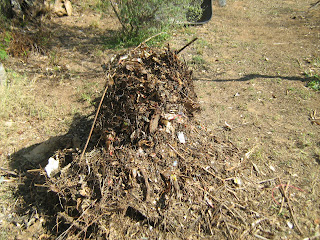 I don't think the Steelers are brutal, but if they do win, the season and the victory will be tainted, so to speak.


Why? Well, let's start where we must, with Big Ben. His actions last year in that Georgia college town -- even though they didn't result in criminal charges -- are too awful for most of the country, and (still) for many people in Pittsburgh, to stomach. Where diehard Steelers fans see a brave quarterback, millions of others see a cowardly, spoiled kid who used his posse to assist his sexual predations.

Ben's actions have divided the city of Pittsburgh.  And those who despise the Steelers are quick to refer to Ben's charges of sexual assault.  So when Howard Fineman says that the team has already lost, there's some truth to that.  People will view this season as invalid because Roethlisberger was allowed to play.

(Picture above has nothing to do with story; it's just compost in my backyard)
Posted by KeyRose at 7:20 AM