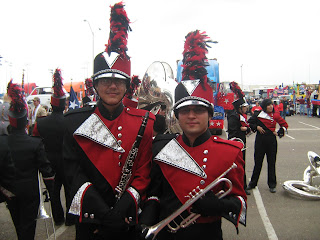 Martin High School was fortunate enough to have two of its band members make the All-State Band this year.

Jose Luis, or "Joey," as he's known as by his bandmates, is a senior trumpet player.  He qualified for 12th chair in the concert band in what marked his first trip to the state level.  He was truly excited to have the chance to perform with some of the state's best musicians.  For him it was a dream come true.

In preparing for the auditions, Jose Luis covered as many musical pieces as he could.  He benefitted from advice from several southern region instructors before the area tryouts; During that teaching session, he was given pointers on what to brush up on.

Jose Luis plans to pursue a degree in music education at TAMIU.

Kevin Rodriguez, a junior clarinetist, is no stranger in the state band arena.  This is the third consecutive year that Kevin qualifies for the state band.  He is the 4th chair in the state!  (symphonic band)  He commented that he worked just as hard as he had in previous years, and credits Ms. Marissa Luna, L.J. Christen band director, for helping him achieve his goal this year.