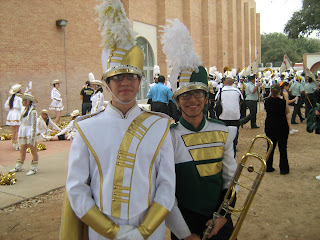 The Nixon High School Band has not only had the good fortune of receiving countless marching and concert awards, but two of its members recently qualified for the All-State Band as well.

Bruno Gutierrez is a junior tuba player.  He has auditioned for the state band since his first year of high school.  The third year was a charm as he made first chair in the concert band.  Gutierrez said that he started practicing during the summer break -- had a layoff during marching season -- and then picked up the tryout music again in late Fall.  "Amazing" is how he described his experience in San Antonio, playing with top notch musicians.

Hector Lozano, senior trombone player, made 8th chair in the symphonic band.  This too was his third year trying out for this coveted position.  He followed Bruno's sentiments by adding, "not even that word can describe" the experience we had.

Hector is thinking about pursuing a degree in either music or biology.

Congratulations, gentlemen.
Posted by KeyRose at 9:47 AM