Book Title for the Weak 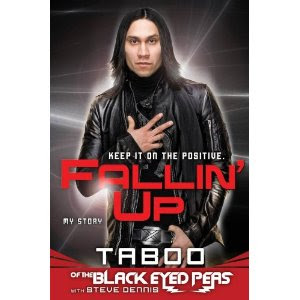 LaSanbe's book recommendation for the weak is a selection from the Black Eyed Peas very own Taboo: "Fallin' Up". Here is a synopsis from Amazon.com of this soon to be classic.

Born in East L.A. in an area notorious for street gangs and poverty, Taboo was haunted by that environment, which seemed certain to shape his destiny. Yet, steered by his dreams to be a performer and assisted by fate, the young Taboo was thrown a rope when he discovered the world of hip-hop, where talent and love of the music itself transcended all. Supported by his one true champion, his grandmother Aurora, Taboo chased his dreams with a relentless tenacity. He refused to surrender, regardless of what life threw at him— including becoming a father at age eighteen.

But even after the Black Eyed Peas beat seemingly insurmountable odds and achieved stardom, it wasn’t all Grammys and platinum albums. Taboo delivers a searingly honest account of his collision with fame’s demons, including his almost career-ending struggle with drug addiction and alcoholism. He takes us deep into a world few of us can even imagine: a show-business heaven that became a self-made hell. But inspired by the love of his family and tapping anew into the wellspring of self-belief that had sustained him in the past, Taboo learns to keep his demons at bay, his addictions in check.
Posted by KeyRose at 5:57 PM