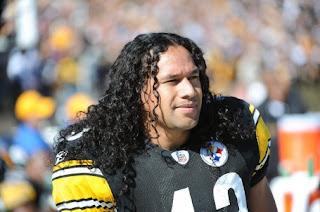 The Pittsburgh Steelers recently named their own team MVP for the year, and it is none other than strong safety Troy Polamalu.
From Steelers.com:
What does Most Valuable Player mean? Is he the player who has had the best year? Or is he the player his team can least afford to be without?
Well, in 2010 Troy Polamalu was both to the Steelers, and so it was no surprise when he was voted the team’s MVP Award, somewhat surprisingly for the first time in what already is an outstanding career.
“This guy has intuition, has innate awareness and ability,” said Coach Mike Tomlin. “He probably trusts his more than anybody else I’ve ever been around. When he makes a decision to take a calculated risk, he’s 10 toes in on it. He’s full-steam ahead. That’s courage of conviction.”
Congratulations to Troy and GO STEELERS!!!