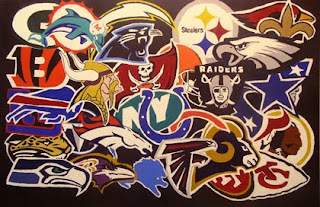 The NFL playoffs are now set. Twelve teams remain standing; twenty other teams are officially on vacation. Sadly, the hometown favorite Cowboys are not in the playoffs, but their futuristic stadium will be the home of the SuperBowl next month.
Here are the matchups for next weekend...
AFC Wild Card:
New York Jets @ Indianapolis Colts (7pm-Saturday)
Baltimore Ravens @ Kansas City Chiefs (12N-Sunday)
NFC Wild Card:
New Orleans Saints @ Seattle Seahawks (3:30pm-Saturday)
Green Bay Packers @ Philadelphia Eagles (3:30pm-Sunday)
The winners of these games will go on to the divisional playoffs the following weekend against the top 2 seeds of their division:
AFC: #1 New England Patriots, #2 Pittsburgh Steelers
NFC: #1 Atlanta Falcons, #2 Chicago Bears
I am one of the many female football fans out there, but shockingly, I don't know all there is to know about the NFL. I would like to know why the top seeds get to play the "worst remaining seed" in their conference? They are already #1, yet they get to play against the "worst" team and after a bye-week?! Sounds great for them, but what's up with that?
Another thing I disagree with is having a team with a LOSING record qualify for the playoffs, because they "won" their division. The team with this distinction is the Seattle Seahawks, who finished this season with a 7-9 record! They get to advance for being the top of the most inferior of the NFL divisions: the NFC West! And to top it off, they get to HOST the Saints! Meanwhile, other teams like the San Diego Chargers (9-7), the Tampa Bay Buccaneers (10-6), and the New York Giants (10-6) among others are OUT! I hope this rule changes, somehow!
Good luck to all the teams (except the Patriots!). I hope we get to see some exciting football this coming weekend!!! As they say in Cowboy country: Yeeeeeehawwwww!!!!!!!!!!
Posted by KeyRose at 1:51 PM