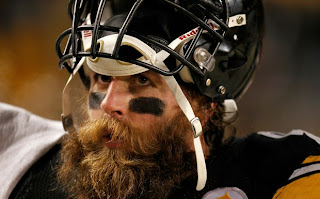 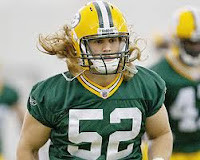 Today marks one week to the Super Bowl where the Pittsburgh Steelers and the Green Bay Packers will fight it out in Cowboys Stadium. But there is another battle brewing: which players have the best (or most) hair.
Arguably the most famous on the Steelers is #43 Troy Polamalu, who has an endorsement with Head & Shoulders shampoo. The lucky man on the Packers side is #52 Clay Matthews,who apparently has a new deal with Suave. (pictured)
Brett Kiesel of the Steelers gives them both a run for their money with the amount of facial hair he's been sporting as of late. They even had to make the necessary decorative adjustments on his cupcake (#99), which were presented to the Steelers before leaving Pittsburgh! (see photos) I wonder if they have to keep adjusting his chin strap too!
Some other players on both teams with the lovely locks include Packers Atari Bigby and A.J. Hawk, and Steelers William Gay and Chris Kemoeatu, who rocks an afro-mullet...nice! May the best hair win.
Posted by KeyRose at 2:09 PM