Problems with CAA highlight problems with the way Webb County is run
By
Published: Thursday, January 27, 2011 2:41 AM CST
To the editor:

“Webbgate” has become the most pervasive scandal in Laredo’s history.
The Webb County Weatherization Program’s abominable actions are a nuanced reflection of the well-entrenched spoils system haunting Webb County.
On Dec. 31, 2010, an article in Laredo Morning Times disclosed that Webb County will lose $2.4 million because of alleged misuse of federal funds that had been allocated under the American Recovery and Reinvestment Act.

The monitoring report by the Texas Department of Housing and Community Affairs notes that Marion Services, owned by Aaron Ramos, performed weatherization work on some homes.
Ramos provided weatherization services for his father, former County Judge Andres Ramos, who may not have been qualified to receive ARRA financial assistance.

The travesty is that widows, disabled, the indigent and elderly taxpayers will not be receiving much-needed services.
Since the county commissioners and the county judge are not taking care of business, this is only the tip of the iceberg.

During this period of economic recession and high unemployment, they still continue to reward themselves with inflated salaries and benefits.
If they had any sense of decency, they would take their combined yearly income and apply it to the indigent citizens.

This commentary also appears in the current issue of LareDOS.  Speaking of LareDOS, hop on over to their fundraiser tonight.  The weather's great and you can pay at the door. 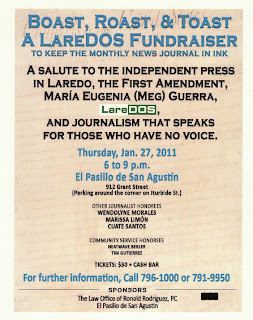