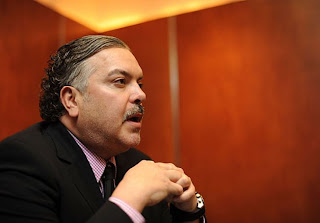 Actually this man is not really an architect but he does work for a firm who has been tasked with redesigning downtown Laredo.  The Express-News features the story behind the man, which includes some controversial aspects.

The latest: a bid to manage construction work for nearly all of the San Antonio Independent School District’s $515 million bond. Muñoz won the contract, along with $12.5 million in fees. But critics say he doesn’t fight fair and his over-the-top tactics can go over the line when he plays politics with taxpayer funds.

A lot of people are expecting results from Mr. Munoz.  Whether any ethical lapses exist, we'll find out eventually.

Let's hope city staff made the right decision a year ago.
Posted by KeyRose at 10:09 AM