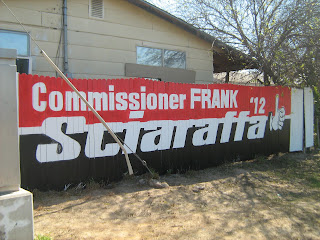 This sign popped up recently along Zapata Highway.  I have to say:  it's kinda early to be putting up campaign signs for the next election cycle.  The only thing that can explain this is that people want to get a jump on prime ad space.

This little tactic has become the norm in Webb County -- people put up their names on walls or windshields along with a certain number year.  They don't necessarily mention the office they're seeking; they just want to put their name out there so people can have it on their minds.

In any case, I think it's too early for Frank Sciaraffa to start campaigning and for giving himself a thumbs up.  We have to see what becomes of the grievances and investigations currently pending at county.

The only thing that's certain is that Frank won't take part in any debates.  He'll get out and meet with some of his constituents but he won't give his opponents the time of day.
Posted by KeyRose at 9:56 AM