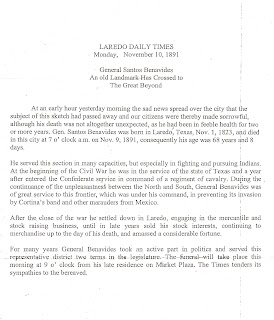 The Genealogical Society held their meeting at the public library yesterday afternoon.  They disposed of club business first before handing over the microphone to their featured guest, Dr. Hector Farias.  Dr. Farias' presentation focused on the life of Col. Santos Benavides, a native to this area who sacrificed much to serve the people around him, yet is barely remembered for his contributions.

After the presentation I had a chance to ask Dr. Farias for his take on Col. Santos Benavides.

KR - What can you tell us about his personal life?

Dr. Farias - He married Agustina Villarreal; they had no children so they adopted a boy and a girl.  The son died in his teens.  The daughter married Gen. Lazaro Garza Ayala de Monterrey.  He was the great-great grandson of Tomas Sanchez.

Of What benefit was his military training?

The whole area here was very lawless with the Apaches, Comanches; and they were raiding and plundering.  And then, of course, there were a lot of bandits also.  So he had his work cut out for him, getting rid of the bandits and outlaws.  And then, of course, shortly thereafter, the battles with Union Army but when Santos died he was able to obtain some sense of security.
During the Civil War he had two things to contend with:  not only the Union Army but then the indians who would raid the settlements because the men were off to war,
so it was a big undertaking.

Why did he side with the Confederacy during the Civil War?

These people here were very independent so when they got involved with the Confederacy, it was not over slavery, it was over states rights.

To what extent was Col. Benavides involved in politics?

Before the Civil War he had been an alderman, mayor, county judge, state representative.  And when he was called on after the war to testify in Washington about his peace-keeping operations here, at the legislature, where his portrait hangs in Austin, (he was) one of the famous men in Texas history.

You said that his memory hasn't been truly honored.

There's a school that was named after him in the 1990s in the United Independent School District and there's a monument on a little plaza off IH-35 when you're going south to Nuevo Laredo, but since there's a lot of traffic, nobody even knows it's there.  What I'm saying is this town has never really honored him in a way that they should. 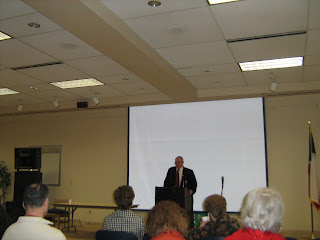 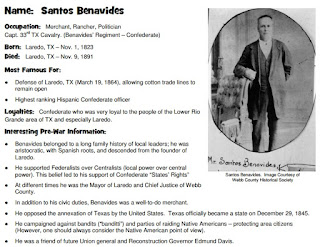