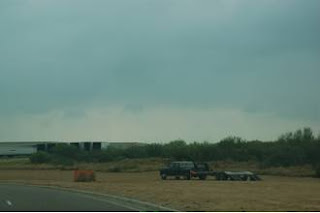 El Manana reports that city officials will be in talks today with the engineers who will be tasked with coming up with the design for the new $18 million baseball stadium.

Construction should start sometime in mid 2011.

Translation:  The design company, HKS, is a top notch organization who designed the Dallas Cowboys' stadium.
No mention was made whether the design had any bearing on the Cowboys' bad luck this season.

Pro8news brings us word on Emilio Zamora and his girlfriend stalking activity.  You may remember this person from last week:  he impersonated a cop using a borrowed business card.  We might grant him LaSanbe's 2010 "Menso, Not Mensa" award.

What is going on in this guy's head is beyond me.  I really hope that he doesn't have some strange idea that he's going to somehow earn frequent flier miles by being busted by the cops frequently.  Somebody needs to tell him that he doesn't get bond waived after the third arrest.

The Laredo Times brings us this:
Special to the Times
Published: Wednesday, December 1, 2010 2:00 AM CST
Groundbreaking ceremonies are today for the new irrigation project at the Lake Casa Blanca Municipal Golf Course.
The $320,000 project is considered step one in major improvements at the facility. JMC Golf, a licensed irrigator out of Livingston, will install the system.
Actually, step one is masqeurading the actual digging of the sprinkler infrastructure as a ground-breaking event.  Those taking part in the ceremony will hopefully get the hint after the first 100 meters.

KLDO reports on cases of fraud being perpetrated on local business owners.  Queta Coqueta was shaken down for $600.00 after she handed over personal information to some anonymous person in the valley.  I'm not quite sure, but there might be a special place in hell for those who prey on party clowns.

Bordertown Blues documents the fact that we now officially have more mascots per capita than any other big city in the United States.  *Caw, Caw!*
LaredoTejas suggests that we host a mascot convention.