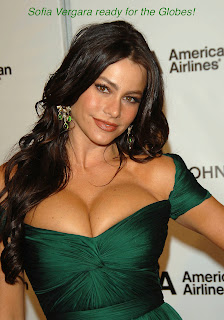 There is always that holiday letdown after all is said and done. Then you're faced with the task of putting away all those decorations after el Dia de los Reyes. But today I was reminded about a light at the end of that tunnel: Awards season! The nominations for this year's Golden Globe Awards was announced early this morning.
Some of TV's notable nods went to "Modern Family," "Glee," "Mad Men," "30 Rock," "The Good Wife" (a KeyRose personal fave), and "Dexter."
The Best Film drama category includes "Inception," "The Social Network," "Black Swan," "The Fighter," and "The King's Speech." "The Kids are Alright" and "Alice in Wonderland" are among those nominated for Best Film-Comedy. (Gotta go see most of those flicks.)
Robert de Niro will be presented with the special Cecil B. DeMille Award. The show will take place January 16, 2011 on NBC.
Posted by KeyRose at 4:45 PM