Quote (and actions) of the Weak 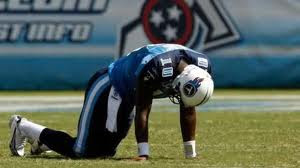 Where to start.. Looks like Texas legend Vince Young has been demoted from his starter role in an apparent meltdown today. A bad day at the office resulted in a Young thumb injury, a screaming match with his boss, leaving the workplace early and then throwing the company uniform at paying customers. We'll see where this goes. Not looking good for VY..
Posted by KeyRose at 7:05 PM