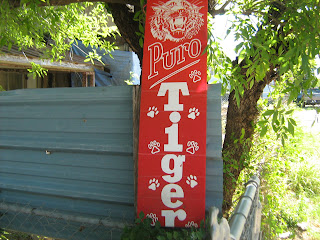 I hope everyone has their ticket for tomorrow night's game between Martin and Nixon H.S.  The game will be played one last time at the UISD Student Activity Complex.  It should prove to be the best game of two teams with losing records.  I'm predicting a score of 3 to 2, either way.

I will not be going to the game.  I'm waiting for the opening of the new Shirley Field.  Hopefully it'll be ready in another year.

There are a lot of Tiger supporters out there that still like to repeat the phrase, "Once A Tiger, Always A Tiger."  I can do without it.  Being from the barrio I'm more partial to "Puro Tiger."  It's to the point and can be emblazoned on my oxford shirts so much more easily.  Say it with me:  Puro Tiger!  It's like a one-two punch.

Have a good weekend.
Posted by KeyRose at 1:17 PM