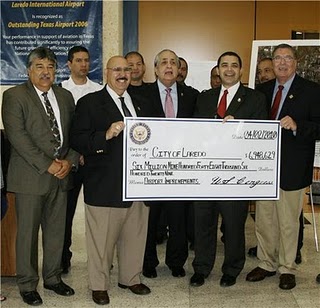 Our frequent-flyer-mile congressman, Henry Cuellar, likes to get out and meet his constituents.  If offers him the chance to prove to everybody that he's working for the needs of the district.  For him it's face time with his peeps.  To us it's an opportunistic earmark announcement.

Photo ops aside, republicans are looking to tightening Congress' belt by banning earmarks.  Senators K.B. Hutchison and J. Cornyn couldn't be any happier to abide with their party's wishes.  But as the Texas Tribune reports, Texas does not lead in the area of monetary awards.

compared to some of the states in the United States, such as Hawaii, North Dakota, West Virginia, Vermont, Texas is way, way down the list in terms of the amount of money per capita that is it actually receiving and having funneled to it the earmarking process."

Texas lawmakers have to go along (as most republicans do) with this little charade to give us the impression that they are fiscal conservatives.  They want to rein in deficit spending and balance the budget.  But their efforts really wouldn't amount to much since earmarks don't take up a lot of the actual budget.

A lot of this is mostly for show, a lot like what Cuellar does with his pressers.  Banning earmarks sounds nice to party loyalists but it's a drop in the bucket to, say, making cuts in defense or ending our involvement in the Middle East.

Banning earmarks might not make a whole lot of difference either way.  If they're are done away with, I don't know that people are going to lose sleep over them.  But repubs would use the opportunity to pat themselves on the back once again and smugly pose for more photos.
Posted by KeyRose at 3:40 PM