A reader tipped me off to a tense exchange between one Gene Belmares and Sergio Garcia on Facebook.  Take a look. 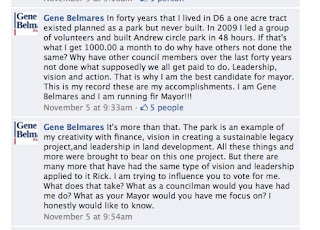 Belmares toots his own horn for turning some vacant land into park space.  While commendable, I don't like his tone.  He questions why those who came before him didn't accomplish what he has.  Apparently his "leadership, vision and action" are responsible for the Andrew Circle park.  That's great.  It only took him seven years in office to complete.

Mr. Garcia tries to shift attention to who is really responsible for the park:  the taxpayers.  Belmares shoots back by patting himself on the back and giving Mr. Garcia a condescending exclamation (point).  And the fun continues. 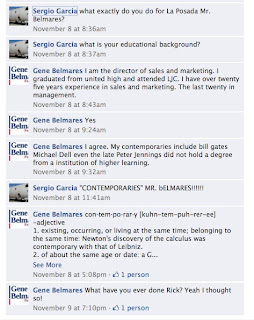 When Mr. Garcia questions Gene about his educational background (as many have in the past), the councilman gets all snooty and starts up with the name-dropping.  I love the way he compares himself to Bill Gates (I capitalized, he didn't) and Michael Dell.  It reminds me of the time when someone at the LMT was comparing their paper to that of the NY Times.  But that's neither here nor there.

If I've learned something from this exchange it's that Gene doesn't handle criticism very well.  He wants us to believe that he's the best choice for mayor but comes out acting like an impulsive adolescent on the Faceplace.

Raul Salinas didn't fare any better when he had to face an angry constituency.  Now I know why these jokers don't hold town hall meetings.  They either fold like a cheap suit or get up all in your face if given the chance.
Posted by KeyRose at 3:32 PM