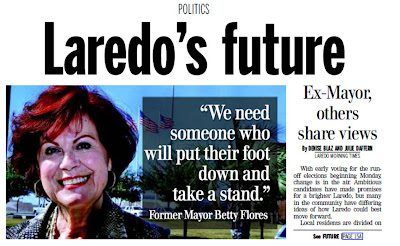 Ex Mayor, Betty Flores, was back in the news today. The Laredo Times, who used to praise Laredo's ex-alcalde to no end, gave her one more platform: weighing in on the current political races.

Flores, who was known affectionately as "The Joker" while she was in office for having a wide, forced smile at every photo op, points out that Laredo needs to maintain strong ties to Nuevo Laredo to ensure growth. Or something like that.

Even though she has not visited Nuevo Laredo since 2009 for "safety reasons" Flores believes that Laredo's next leaders need to keep focus on the intertwined futures of the two cities.

“I think the next four years are going to be very critical for Laredo and Nuevo Laredo. We need someone who will put their foot down and take a stand,” the Joker contends.

There are too many political rules to mention here. Namely suggesting that Laredo needs a strong leader implies that she meant like her. Also, where was all this philanthropy and good will towards the sister city when she was in office four years ago?

Perhaps she is looking out for some extended family members that might have property/wealth tied into the sister city.

Few recall, but Flores's extended family made out pretty well when she was in office. The Laredo Entertainment Center (now LEG) and its outlying areas, which Flores championed relentlessly was built on a kinsman's property.

But, what really got on peoples' nerves the most about Flores was her disastrous appearance on CNN's Lou Dobbs show. It was there with a hate mongerer, that Flores revealed her Ostrich in the sand routine, disavowing that violence was bad in Nuevo Laredo and maintaining a facade of harmony in the Gateway City. She infuriated families of kidnapped/murdered citizens by stating that those individuals were probably involved in the drug trade, thus, implying that they deserved what they got.

Ah, for the out of sight out of mind mantra to be followed.
Posted by KeyRose at 6:52 AM