Welcome to the NFL 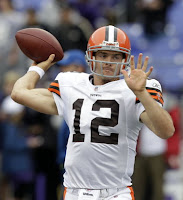 It has been confirmed that Texas' own Colt McCoy will make his official NFL debut this weekend against none other than my beloved Pittsburgh Steelers. Whooweee!! What a way to start rookie!
The Steeler Nation will be welcoming McCoy and the Cleveland Browns at Heinz Field this Sunday. (Maybe now that the game has a Texas angle CBS will work it into the local TV schedule, but I won't be holding my breath!)
The Steelers are understandably favored after a 3-1 start and a bye week. They will also have QB Ben Roethlisberger back from suspension for his first game. But, anything can happen I suppose. Lucky for Colt he will always get to say the words "Pittsburgh Steelers" when he looks back at the beginning of his career. :)
Posted by KeyRose at 10:35 PM