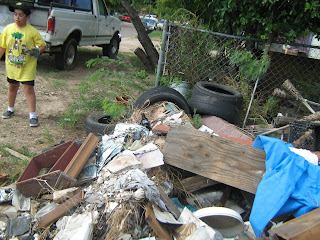 Here's part of a press release from the City of Laredo where they cleaned up District 1.

“Operation Clean-Up is a really positive campaign for helping to beautify Laredo,” said Ronnie Acosta, Community Development Director. “Residents have cleaned up their community, and we have only had to issue a minimal amount of citations.  We encourage everyone to be a part of this campaign,” she said.

For additional information on the clean-up campaign, contact the City of Laredo Community Development Department at 795-2675.
9.99 tons of debris?  You probably have to factor in the 16 junked cars into that estimate.  Nevertheless, as good as the city's efforts are, more has to be done on our parts.  We're awash in trash and illegal dumpers don't help matters.
Posted by KeyRose at 10:27 AM