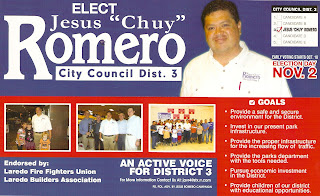 I received this nifty little mailer in my box yesterday.  I have to say it's pretty good and must've cost a pretty penny to develop and deliver.  I have not met all five candidates for City Council District 3 (El Chacon).  The public access channel will present their debate sometime soon, if they haven't done so already.  There's where I'll get a better idea of what I'm dealing with.  As far as spending.....

Less spent to get elected

Published: Friday, October 15, 2010 2:13 AM CDT
In an election season that has proved difficult for candidates to collect campaign donations, many City Council candidates are spending less than in previous elections, and, in some cases, less than they expected to spend.
Being an incumbent has its ups.  Councilman Landeck:

it means "that I do not have to cross the barrier of presenting myself to the voters."

That might be true, but we have no way of knowing since you haven't sent out any type of fliers.
Abraham Rodriguez and Alex Perez are also running for District 3 and have visited recently.