Houston Got Money For Police Too 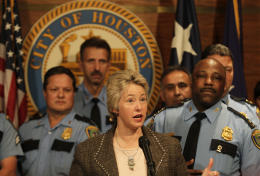 At their presser I don't see a camera-friendly congressman and no mention of any D.C. trip is made.

Last year, the city was shut out of the COPS hiring program, which issued $1 billion in grants through the federal stimulus package. The city had applied for $50 million in that round of funding. Former Mayor Bill White sharply criticized the decision and said Houston was being penalized for its strong financial position compared with other areas.