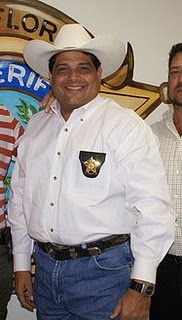 Not long ago we had a man who possessed a special kind of bravado guarding our border.  His determination was matched only by his meticulously creased and starched oxford shirts and Wrangler jeans.  Luckily we had a local media that was able to keep up with his star power.

When he was voted out left for greener pastures, I feared that a void would be left where charisma once stood, but boy was I wrong.  As the border continues to face challenges, a new man has picked up the baton of justice and photo ops.  That man is Zapata Sheriff Sigifredo Gonzalez.  Watch him in this Rick Perry commercial where he takes a page from the Rick Flores fashion department and does a superb job of pointing.  Glory be, balance restored.  (See the video here if it doesn't appear below)