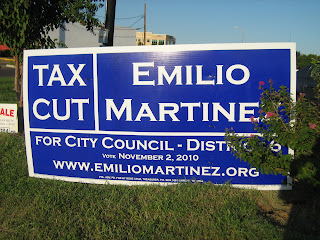 Local attorney Emilio Martinez is running for City Council District 6 and the one thing he wants us to remember from his campaign is "Tax Cut."  He doesn't go the usual route of inserting a nickname into his signs.  No, what gets top billing on his posters are the words 'tax' and 'cut.'  This message is so ridiculous, he might as well should've designed the ad to read 'Emilio "Tax Cut" Martinez.'

Mr. Martinez tries to appeal to people's most common of gripes: the alleged high tax rate.  He is running to represent District 6 which is located in north Laredo.  It's safe to say that that part of town has a hefty property tax price tag.  It stands to reason if the HEB in the area is know as the 'Gucci-bee.'  But his strategy is so humorous in its cynicism.  A three-car pileup has more subtlety.  Most people are concerned about their taxes but he wants his candidacy to have the same effect that the Mami Chulas drive-thru has on men:  we'll catch sight of it; slow down; rubberneck; and give it a second thought.

Seriously, a tax cut?  You have to convince the other seven people on the council to go along with you.  And with the city always facing a budget crunch, who has the time or inclination to pass a tax cut.  Sure they'll say that the city council hasn't raised taxes but that doesn't mean anything when your property is appraised at a higher rate every year.

I can't say this is the most ridiculous sign I've ever seen.  But Mr. Martinez could've been a little more creative; he's a lawyer for crissakes.
The New Generation Rotary Club is hosting a candidate forum this Tuesday with the candidates for District 6.  We'll see if Mr. Martinez is as predictable as he is superficial.
Posted by KeyRose at 4:54 PM