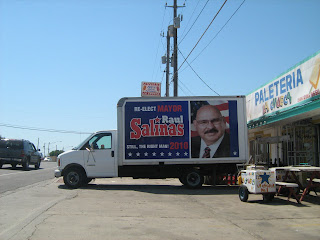 Published: Saturday, October 16, 2010 3:02 AM CDT
(Editor’s note: This is the third and final installment of a series regarding campaign contributions and expenditures for candidates running in the Nov. 2 election.)

Incumbent Mayor Raul Salinas has caught and surpassed in campaign contributions an opponent who began the election season with a flurry of donations.
He's a man of the people, and he's got their money to use for big pictures of himself posted on large trucks.
Posted by KeyRose at 12:06 PM