Incidents throughout city, including near schools
By
Laredo Morning Times
Published: Tuesday, September 14, 2010 1:18 AM CDT
NUEVO LAREDO — Several people were killed here Monday, following a series of car chases and altercations between military forces and armed civilians throughout the city, including in front of schools.

Our neighbors to the South are getting ready to celebrate Mexico's bicentennial anniversary.  With threats of violence, it's understandable that cities across the state of Tamaulipas make adjustments. 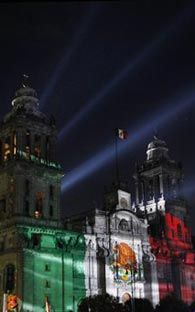 The Excelsior reports that some cities won't host parades to celebrate Mexico's Independence Day, but instead, have a scaled-back public ceremony.  The cities of Tampico, Madero, and Altamira will commence their festivities at 7:00 p.m.  Altamira will have its actual grito at 9:00 p.m. and Ciudad Madero at 10:00 p.m.  Nuevo Laredo Mayor Ramon Garza Barrios only confirmed that increased security will be available at their celebratory site.

We wish them luck. 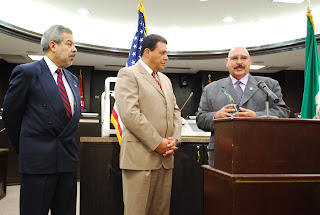 Earlier today, City of Laredo Mayor Raul G. Salinas (right) welcomed Mexican Consul General Miguel Angel Isidro (center) and Consul Adscrito Juan Jose Martinez (left) to recognize Mexico’s Bicentennial Anniversary of their Independence.  Tomorrow, Salinas, who will be traveling to Washington, D.C. to meet with Vice-President Joe Biden, to discuss the drug violence that is plaguing Mexico, in particular Nuevo Laredo, and the possible spill-over into Laredo, will be unable to participate in the annual Dies y Seis celebration held in downtown Laredo and sponsored by the Consul’s office.
Posted by KeyRose at 2:07 PM