A lot of the email updates I receive I end up discarding but I thought this particular one was of some significance given what's going on between TAMIU's Alumni Association and the Webb County Community Coalition.  This release is provided courtesy of Xochitl Mora.

Laredo, TX –– Earlier this summer Border Media held La Ley Battle of the Bands
Presented by Bud Light, the 3rd annual school uniform drive and scholarship fundraiser at the Laredo Energy Arena.  The money collected at the door will be donated to both Laredo school districts and South Texas Academic Rising Scholars (STARS) at a press conference in City Hall Council chambers.

Bud Light sponsored the event to benefit the students of our local school districts.  The event was held at the LEA so obviously they're not going to get hassled by the WCCC for serving alcohol at a fundraising event, not as is the case with the alumni association's AutMus Fest that's taking place tomorrow afternoon on the grounds of the university.  The goal is the same -- raising funds for students -- but the locale is what gives some people pause.
The point is that Laredoans like their beer, for better or worse, and the local distributors acknowledge that as they help sponsor a variety of socials.  They do their part for the sake of the community.  They have much to gain as well but their brand carries weight when a show must be put together.  What the future holds for beer distribution at events held at Texas A&M International remains to be seen.  For now the AutMus Fest has another obstacle in its way:  the weather.

It's been raining since before noon today.  The Expomex was set to start in Nuevo Laredo tonight.  It runs for a couple of weeks so they can recover in the coming days, but the AutMus Fest organizers must be crossing their fingers, hoping for better weather tomorrow.
The picture I'm including below is  of a flyer I found on my front gate.  I figured I would post any new notices I got whether they were delivered via the internets or by hand. 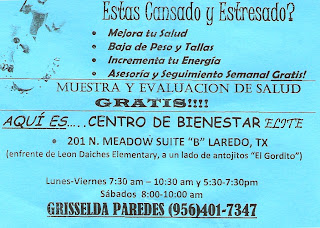