One Back In, One Out

Laredo Morning Times
Published: Monday, September 20, 2010 1:08 AM CDT
Ricardo Perez, the LISD attendance officer who was fired and arrested in October 2009 for failing to report the abandonment of 2-year-old Katherine Cardenas and three of her siblings, has been cleared of any charges and reinstated at the district.

One employee is back on the LISD payroll after failing to report a case to Child Protective Services.  Another, however, has been let go because he parked his school bus at the depot with a sleeping child still on board. 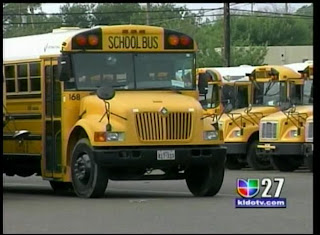 KLDO reported Friday that a five-year-old child that was being transported to Ligarde Elementary School fell asleep along the way.  When all the kids exited the bus at the school, the bus driver made his way to the LISD bus depot, not knowing that one student was left behind.  The bus remained at the station until around 2 p.m. when the driver came back to make his afternoon rounds.  That is when the little boy was discovered.  The reporter mentioned that temperatures got up to 102 degrees that day (Wednesday).

Thankfully the student was OK.  The bus driver, however, not so much.
Posted by KeyRose at 3:54 PM