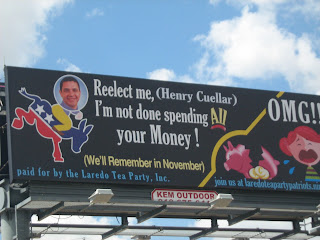 Local candidates might not have enough money to put up a nice ad on a billboard, but the local tea party contingent surely does.  This one is located on Highway 359, near Whataburger and Bob Bullock Lp.

Tea Party supporters and candidates have gained strength throughout the country.  Several have ousted republican incumbents in primaries and moved on to the general election.

That's good and bad.  Good because people have taken an active role in the political arena; Bad because their biggest supporter, and face of the Tea Party, is Sarah Palin.
Posted by KeyRose at 6:57 PM