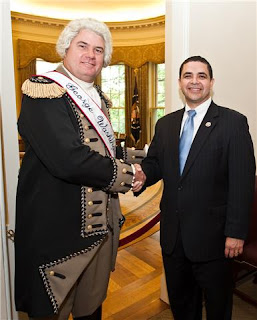 WASHINGTON, DC – Today, Congressman Henry Cuellar, TX-28, joined by City of Laredo officials and Laredo Police Department, will announce that the police department has received a grant for $4,369,266 to hire 22 law enforcement officers.


The grant, which will be distributed over three years, is from the Department of Justice’s Community-Oriented Policing Services (COPS) program, which grants directly to state, local and tribal law enforcement.

Mayor Salinas has been vocal at how the federal government hasn't really funded first responders to be at adequate staffing levels.  His favorite line is, "we can't have homeland security without hometown security."
Now that we're getting money for 22 new officers, I bet he's going to take credit for it during the upcoming debates, all because he took a trip to D.C.

Info. above courtesy of the Cuellar camp.
Posted by KeyRose at 10:21 AM