Mayor Salinas: An Army Of One 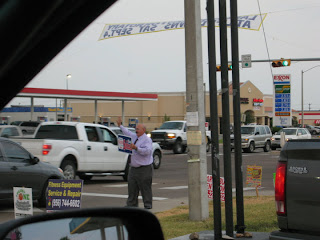 Photo courtesy of Only In Laredo.

You have to hand it to Mayor Raul Salinas - he's got the energy and chutzpah to go out and market himself on the rough and tumble streets of North Laredo.  But is this (standing on the corner) really the way to run a campaign?  I have no inkling as to what hoops one has to jump through to get elected locally but my Spidey sense tells me this isn't one of them.

The first thing that comes to mind is the fact that the mayor has to actually hold one of his signs up for people to make the connection with him.  You would think that after attending every ribbon-cutting, ground-breaking, jamaica, dance at the Casa Blanca Convention Center, televised city council meeting, rooftop toy drive or press conference, we would know exactly who he is.  He's probably trying to target those who are new to the political scene who might just be eligible to vote.

The picture provided could only be giving us a glimpse of what one of his pep rallies look like.  There could be a bigger crowd behind him raving at drivers to vote for this man.  That has to be the case, it just has to.  I don't want to think that Salinas is out running errands, like cashing his check, and then taking ten minutes to sell himself before moving on to his next short-term goal, like picking up his dry cleaning.

If the photographer is giving us the whole picture, then this would qualify as pathetic.  The money that it takes to promote yourself through local media outlets is hard to come by, but standing out on the corner of a busy intersection trying to connect with your motoring constituency lacks depth.  This is the perfect tactic for someone who doesn't want to get to the heart of things, but instead glad-hand, so to speak, and dash away.  It's akin to the choreographed photo op:  you put your face out there without having to handle tough questions or criticisms.  Laredoans are on the go and they are not going to turn around to challenge the mayor on an issue; and that's exactly how he wants it to be.

Mayor, if this is your strategy, then I invite you to the Chacon neighborhood.  The corner of Meadow Ave. and Green St. gets a lot of traffic.  If you see somebody approaching you with a camera, don't be alarmed, it'll only be me.  Good luck.
Posted by KeyRose at 10:25 AM