Hey, I've Got An Idea 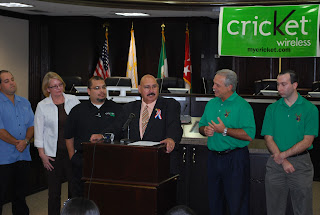 LAREDO, TX- Mayor of Laredo Raul G. Salinas, in conjunction with the Central Hockey League’s Laredo Bucks, challenged the Rio Grande Valley Killer Bees Monday to participate in the first-ever Cricket Mayor’s Cup for the 2010-11 season. The challenge was made in front of the media and a number of fans during a press conference at Laredo’s City Hall.


“We want to boost our Bucks rivalry with the Bees to the next level and get the City of Hidalgo involved as well,” Salinas said. “We are proud of our Bucks and want to challenge the City of Hidalgo and the Bees during the season to see who earns the most points between the two teams. The team who earns the most points head to head against each other will win the Cricket Mayor’s Cup.”
Posted by KeyRose at 2:08 PM