Candidate Abraham Rodriguez Leaves His Mark On My Gate 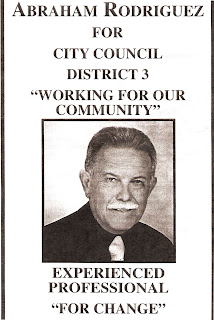 This flyer was taped to our gate yesterday.  So far it's the only notice we've gotten from the five candidates running for city council District III.

On the reverse side Mr. Rodriguez lists his professional experience which includes being an LISD trustee for 17 years, among other things.

I'm actually kind of surprised that so many people turned out for this race being that Dr. Landeck still has some time to go.  Gene Belmares and Hector "who still likes to be called 'Tito'" Garcia are moving on due to term limits.  Landeck has some name/face recognition which makes it tougher for an opponent to oppose.

Nevertheless, we wish Mr. Rodriguez and the other three candidates - J. Romero, R. Hinojosa, and Alejandro Perez Jr. - best of luck.  They've got 58 days left to make their case known.
Posted by KeyRose at 10:17 AM