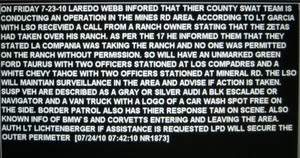 At least a couple of media outlets are reporting that the alleged ranch takeovers that occured late last month have now been confirmed.  As proof, they're including documentation that's described as a police report.

I find it difficult to accept this report as legitimate since it starts off by saying, "Laredo Webb Infored."  And even if law enforcement went out to check the area, there's no mention of a standoff.  They are quick to put up a report, that could be bogus, but not be troubled to verify it with the Laredo Police Dept.
Posted by KeyRose at 9:55 AM